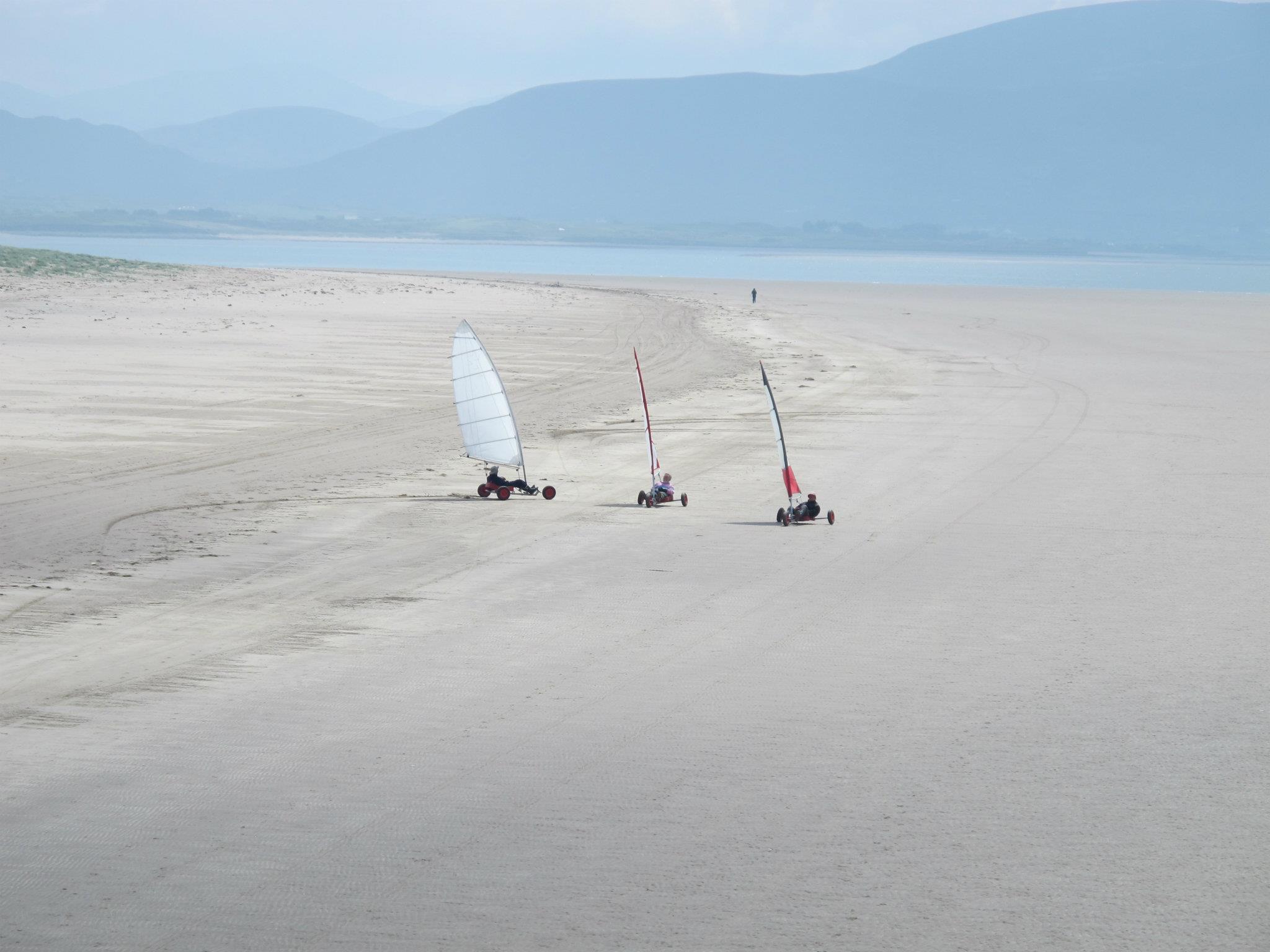 Edited extracts from an Andy Parr report on his latest trip to Kerry in South West  Ireland.

We did the Dumps again on Wednesday, but the beach by the golf tee had reverted to it’s normal condition, with holes, moon country, lakes & gulleys … & somehow there seemed to be more pebbles further out onto the beach than before. The whale had been swept out onto the middle of the beach, where the gulls were giving it a good pecking, & there was also a lot of soft pea-shingle just west of the Dumps … all in all the beach was not looking it’s best, but Jim & I didn’t let that stop us, despite Jim having bearing trouble. Seamus arrived, & Jim left for Cork shortly after, so I felt I had to keep Seamus company … & we sailed on until the incoming tide forced us off the beach … after covering 61 miles in 3.5 hours.

Thursday’s wind had South in it (WSW, 20 mph) so … back to Inch, where the gliders had set up in the middle of the wet beach. I could see cars further down, by the tallest dune. where the beach dries out first, so drove round the gliders & joined them, parking safely on the high water line. I had just set off sailing when one of the glider folk drove up & asked me to move the van out into the middle of the beach, to avoid their towrope landing on it … No problem, says I … & duly moved it. I then fooled around at the far end of the beach for half an hour, actively worrying about the van being out on the beach, way below the high water line … What if a front wheel bearing failed & I had to walk back ? What if that ominous looking sky dumps a load of rain & the beach turns into porridge ? I headed back, & slalomed through the (Brit) fishermen’s cars while I waited for the squall to hit, then popped the yacht in the van & headed for the high water line, only to find that the glider cars had decided to move as well, & we all ended up in the same place.

Seamus arrived & we rigged amidst the gliders … which made for easy communications. Seamus had bought a big racing kite buggy on big foots for e180 & had made up a mast bracket to fit it … he shot off downwind, & took forever to get back … then tried a bigger sail of mine … then whipped out his standard Potty miniyacht & off we went. We successfully avoided the gliders, which seemed to take no notice whatsoever of the squalls, or the incoming tide … & we all left the beach at the last possible minute, having clocked 49 miles in 2.5 hours.

That called for a celebratory chowder at Spillane’s &, on the way back to Jim’s house in Ballyheigue, I really felt that I was “sailed out” … I’d clocked some serious miles (315 miles in 17.25 hours over 6 days) in some wonderful winds, & I had not had to wear my drysuit … I’d enjoyed it immensely & there was no doubt that my last visit to Kerry before the onset of winter had been an outstanding success, so the time had come to say Mission Accomplished.

Friday … I finished tidying up in Jim’s house & went over to Inch again for a final tootle around the beach in the lightest possible airs … using my biggest sail (5.65 sq m) to cruise back & fore on the line of least resistance … while admiring the gannets off Glenbeigh. After 18 miles in 1.25 hours, it was time to go … but not before a tasty lunch in Sammy’s with the man himself, discussing the possibility of holding the European Championships at Inch beach .

Anyway … What a trip ! I wanted fast sailing, & I certainly got it. No breakages … & No need to wear the drysuit. Excellent !  I could’ve done without the gliders, but they were good company … & I’ll get them sailing if I get stuck with them again next year.

A trip to be repeated … & the final verdict has to be … Excellent !