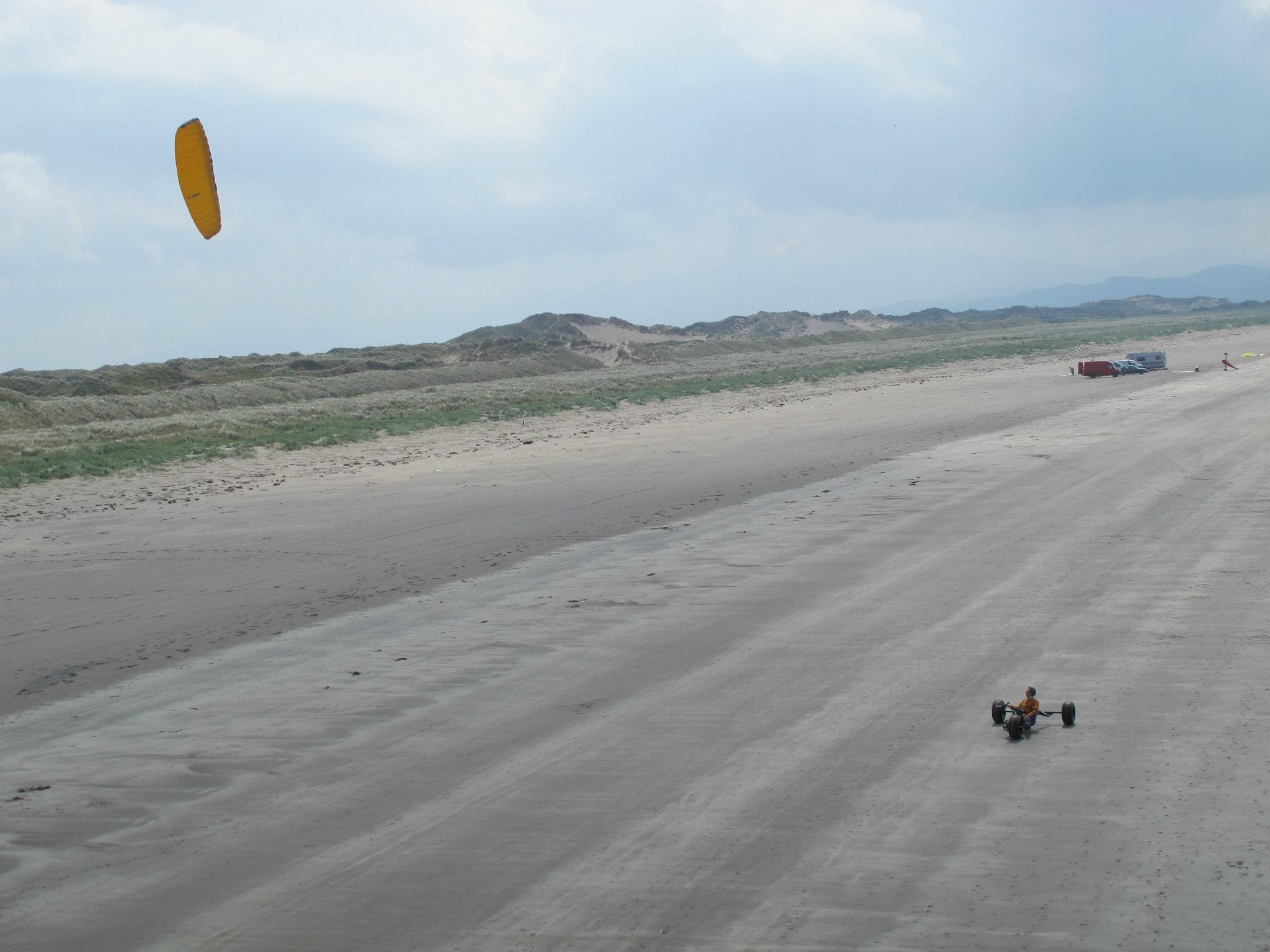 Edited extracts from an Andy Parr report on his latest trip to Kerry in South West  Ireland.

There’s something about Brandon Bay (Dingle peninsula, Co. Kerry, S. Ireland) that is really rather special … magical, even. Could it be the moody magnificence of Mount Brandon & the way the clouds hang around the hills ? Could it be something to do with the light & the way it plays upon the sea ? The beach is fantastic & changes daily, & the food at Spillane’s is almost as good as the view of the Bay from their car park … Whatever it is, there’s something almost spiritual about the place that keeps drawing me back … & I simply had to fit in one last visit before the onset of Winter 2012.

Late September can be a good time for decent winds, & this year definitely did not disappoint !

Eyeing up the tides, Friday 28th September to Sunday 7th October 2012 looked perfect … & the forecast from a week ahead was for 20 mph WNW winds at Kilcummin on Friday 28th, so I declined the chance to join the IPKSA at Benone & went to Kilcummin instead, where I was joined by 5 gliders. If there is West in the wind, the hills at the west end of the beach tend to get in the way of it & the wind goes light, variable & generally iffy, so I rigged up & headed east … & had a splendid time of it, belting around past the golf course & towards the Dumps, before the incoming tide forced me back up to Kilcummin, where the gliders were launching towards Fermoyle. Their tow rope is probably 200m long, & you do not want to be underneath it when the airborne glider releases it & it falls to earth. I’d done 54 miles in 3 hours & clocked some impressive speeds before I left, so Day 1 was a success.

If West makes the wind at Kilcummin iffy, South makes it a complete waste of time … & the place to be is Inch beach, on the south side of the peninsula, which faces southwest. The SW wind was lighter than forecast, & a local disillusioned kitebuggier was miffed that the wind hadn’t arrived as he hadn’t got a bigger kite … so I set him off in my yacht, while I rigged another for myself. 40 minutes later, he brought it back … grinning from ear to ear & absolutely full of the joys of it !

The far end of Inch was in remarkably good condition … the best place to clock top speeds is along the water’s edge (in a SW breeze), turning at the last possible moment before the soft sand at the end of the beach. There is usually a second firm route past the pools, gulleys & moon country inland, by the base of the dunes http://youtu.be/RCqN8z7TuXQ &, 3 hours later, I’d clocked 52 miles.

Sunday’s forecast was for 20 mph westerlies, so I headed for Kilcummin … keen to get some serious testing done & prove my current theory that the best speeds will be achieved by a mini slightly smaller than the maximum allowed by the spec. Sadly the wind proved to be far too lumpy … the overnight rain had swollen the streams to spectacular size &, after crossing them, the wind vanished … then it came back, & vanished again leaving me mid stream … so I packed up & went round to the Dumps, where the wind was obligingly blowing straight off the sea, nice & strong. I tried tacking back up towards Kilcummin, but it was hard work, & I could see the gliders were set up there again, so I stayed on the best dry bit of beach by the golf course.

I could see a shower heading my way, so went back to the Dumps – for shelter & a sail change … to “IR1”, which is bigger & goes upwind better … & met Martin Lynch, his brother Declan & 3 little Lynchs out in their Potty miniyacht… Eventually they let me get on with the sailing & I was able to sail straight back up the beach without tacking, leaving some seriously impressed Lynchs. The best speeds were to be had hooning past Spillane’s pub, which was kelp-free for once, & Declan & I had a fine time of it cutting up the beach by Spillane’s with some fast gybe turns. After 3 hours of actual sailing, I’d clocked 53 miles & the tide forced us off the beach.

Jim Hickey met me at the Dumps on Sunday 1st October for yet more fun in a 20 mph Westerly breeze. The gliders were back at Kilcummin, & Jim sailed through one of their launches as he tried to join me at the western end of the beach. Luckily the glider folk are well organised & the launch was aborted. I was on my way back to meet Jim & tell him the form with the glider launches when the wind dropped. It soon came back, however, & was much cleaner away from the hills, so we headed back towards the golf course. The area between Stradbally & the golf course was totally flat & devoid of the usual moon country, gulleys & ponds. “Stradbally Gulch”, aka Clark’s Hole, was missing … & some good speeds were to be had belting passed the raised golf tee. Also notable was a large whale washed up on the rocks just passed the golf course. Jim & I tried to reach the gliders again, but the sky was getting darker & darker … & we bailed out just before the Gowlane pea-shingle, & clocked 49.3 mph racing ahead of the squall. Mike Dinsmore joined us & took some tasty pics, which are up on his facebook site. His pics also show how much of the beach was covered with surprisingly large pebbles around the Dumps … & Declan also joined us, with no wet weather gear of any description, but that didn’t stop him … as Mike’s pics prove! Chat kept the mileage down to 35, in 2 hours of sailing.

Tuesday saw some South in the wind, so we headed over to Inch … for a day that was memorable for the ultimate squall that came through. Mike Dinsmore was with us & we set up right by Sammy’s, where the high water line was covered with long thin strands of what looked like grass. The “speed run” round the corner was fast, & the end of the beach was in the best condition I’ve ever seen it … we even sailed out onto a flat rippled “point” out in the estuary – where I’ve found quicksand before – then carried on round the corner, where the ripples were too soft for easy sailing. The wind got stronger, to the point where I hoisted my “storm” sail … &, on one journey back from the end of the beach, the sky looked ominous & I thought Hmph, it might be best if we were at the far end of the beach to avoid this squall … & as we headed back south again, Jim passed us waving & pointing to the west … When we turned at the end of a commendably fast downwind dash, it became clear what Jim had been pointing at. The sky had gone black … http://www.youtube.com/watch?v=yck8PO_KjVQ I remember a similar squall on Pendine where I had to throw my Class 5 on it’s side & dive onto the sail to keep the yacht on the beach, but this was worse … I’d say the wind peaked at way over 50 mph, probably nearer 60 mph. I’ve been out on Cefn Sidan in silly winds before – only to find that the weather station on the Control Tower there had recorded gusts of 50 mph, so I’d say my guestimate is fairly close to the mark. After Mike’s kite had been recovered, the sun came out … everything dried out nicely & we’d clocked 60 miles in 2.75 hours.